Funny thing happened after you left. You know how I was boiling some eggs but I didn’t boil them quite long enough the first time? And, I was then going to boil them again to finish the job?

Well, allow me to explain.

While I appreciate your telling me how Martha Stewart boils eggs, some things are just not ever going to sink in with me. I am what’s called, a “Male”. After you left, I proceeded to fill up the pot with the eggs and water, put it on the burner, and then turned it on high.

Knowing that it would take a few minutes to begin to boil I returned to my projects downstairs in the basement.

I don’t know how much time had actually passed as I was deep into “Male Building Things Mode”. But, as I was working downstairs I suddenly heard a loud buzzing. I thought, “Gee, that’s funny. I don’t think I set the timer. And even if I had, I really doubt I could hear it down here and OH CRAP! That’s the fire alarm ! ! !”

I don’t know what Martha’s boiled eggs look like, but feast your eyes on these puppies! 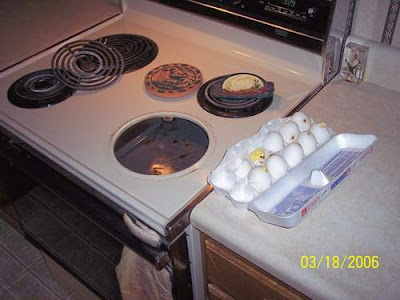 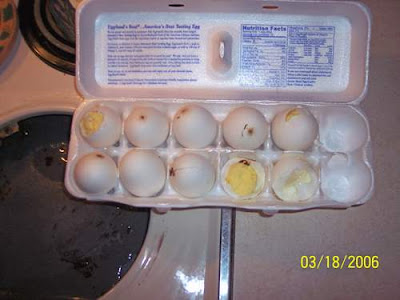