We’ve all been there.

Waiting in line for the guy to spin the sign around saying “SLOW” so we can get through the construction zone.

While waiting, it’s only natural to think about that guy’s job.

Standing there in an orange or yellow vest.

Leaning on a stop sign pole while holding a walkee-talkee. Man, now there’s a job. Government work. Decent benfits. How hard could it really be?

Well apparently it’s harder than one would think. I mean, this poor guy got so tired of standing while actually having to hold something that he rigged up this contraption…. 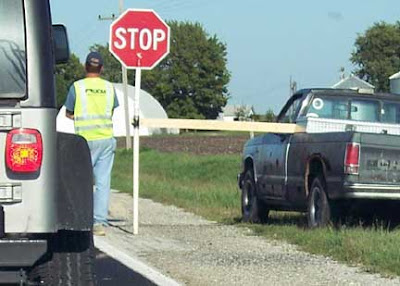 Guess the sign guy doesn’t have it that easy after all!

Well, maybe he does now.